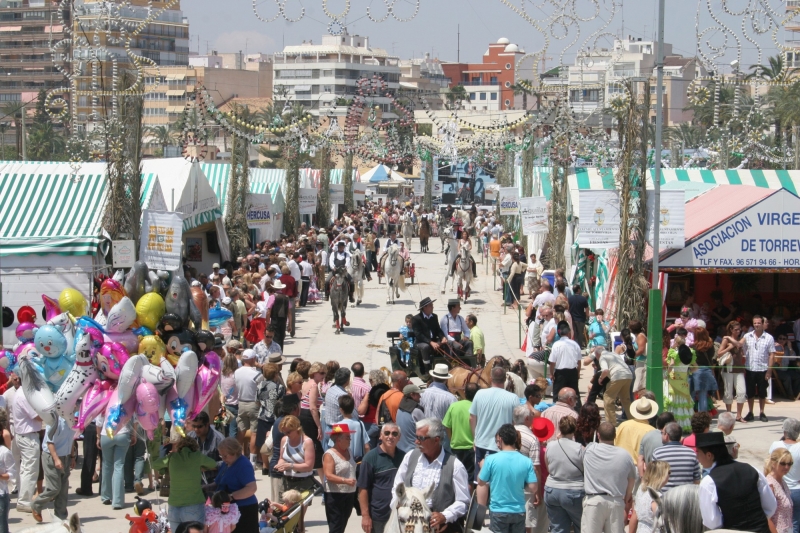 Here are some important facts to help you decide if this is where you want to buy property to live all year round or just for holiday. The World Health Organization (WHO) considers this part of Spain, as the best health climate in the whole Europe. Most of the many beaches long Torrevieja has the coveted blue flag. The drinking water in Torrevieja is among the best in quality and supply along the Spanish Mediterranean coast.

In Roman times, were Torrevieja known for its outstanding harbor, the remains of which can still be seen in La Mata, called the Embarcadero Romano, or Roman docks. Along the coast is the ancient watchtower called El Moro and La Mata, which was used in the Middle Ages to warn the coastal inhabitants of attacks by barbaric pirates.

As with most other Spanish cities and towns, Torrevieja is no different in that it is celebrated many festive events. Torrevieja party calendar starts in February with the sound of carnival. In summer there are outdoor parties and prosesjoner.16. July, the feast day of Our Lady of Carmelo, patron saint of sailors, with a traditional sea and land procession. Torrevieja was a small fishing village with Spanish holidaymakers in the summer until the 1960-1970's when more and more discovered this juvlene the Mediterranean Sea and has made it a famous and popular city with about 90,000 residents and approximately 400 to 500 000 during the summer season and still growth every year. Torrevieja offers many renowned urbanisations and towns of Torre de la mata in the north to La Zenia in the south. Among the most renowned urbanisations are the Los Balcones, Los Altos, Punta Prima Aquas Nuevas, La Siesta, San Luis ogToretta just to name a few.

The taste of the sea is reflected in the local gastronomy with good use of fish and seafood, combined with produce from locally grown vegetables.

Before tourism came to Torrevieja was the production of salt is an important industry and employed many people. The salt was produced in the two large lagoons around Torrevieja. These lagoons attracts a large amount of birds, including flamingo and heron. Salt extraction and salt lakes are still in operation and is considered an important cultural monument and has been further developed by the municipality, with long walkways and beautiful areas around the salt lakes. On these trips, you forget how close you are a busy seaside town.

The most characteristic feature of the local crafts are models of boats made of salt from salt lakes. Boat builders take their creations to the edge of the local salt lakes, where they are left to draw the light salt glaze from the local salt lake before being put up for sale as souvenirs. Torrevieja is known for its salt and is the largest salt producing area in Europe. Large lakes are used to evaporate the sea water so that the salt can be recovered. Visitors may take a trip around to see this fascinating process or bathing lagoon water, which is said to have healing properties and are especially recommended for those with heart disease, rheumatism or respiratory ailments.

Spain is known for its street markets and Torrevieja claims to have its thirst. Here you will find everything from fresh produce, clothes and shoes, watches, binoculars and just about anything you can imagine. But if you are looking for a bargain, be prepared to haggle for everything.

Here you can enjoy the day with the sea and the sun along the beautiful beaches that are thoroughly cleaned every day, and many of these have received recognition from the EEC for its purity. Torrevieja is known for its clean streets where you are going safely and enjoy life.

In the evening you can walk along the stalls selling local crafts close to the harbor and seafront. The evening and night is the right time to enjoy the local discos, pubs and cafés. There are many hotels and Hostels in Torrevieja and therefore have the major problems associated with mass tourism, but there may be competition for places in the summer months. We recommend and be early booking for the summer season where are also rental agencies that conveys flats and villaer.og for utleie.Torrevieja is landscaped so many Spaniards choose the town for their holidays. With its own special atmosphere, continues Torrevieja to grow in popularity as the place to be among foreigners who want to own their own property here.

The city's infrastructure has everything you want and expect from a modern city, in addition to that the city has just completed one sports complex, which also houses an Olympic size swimming pool and can accommodate four thousand people. It is built, a magnificent "Paseo", or breakwater with walkway on top of what used to be the old port. The trip, about one mil (which is beautifully lit at night), provides stunning views of the city in front, the large fishing fleet and port, also overlooks one of the biggest Yachting Marina on the Costa Blanca.

For music lovers there is also a big music academy, which is newly built, where concerts in all categories and flavors are being held. Many of these concerts can be visited for free, because of the town hall attitude to art and music. These are just some of the reasons why you might want to live in Torrevieja, there are many more that you will soon discover when you stay here, and because this city council has a policy of continuous improvement, "Things can only get better."

For those who choose to settle in Torrevieja town has excellent local bus services and bus station, where it also runs shuttle to Alicante airport and Alicante city. You can leave your car at home and not have to worry about parking problems. Buses run regularly from most urbanisations running to-from the city, all the main beaches, markets and shopping centers.

The City Council is very aware of the environment and Torrevieja is one of the ten cleanest places throughout Spain.

Torrevieja lies not only in a region described by the World Health Organization as one perfect climate and environment, but also has a wide range of entertainment and activities.

If you are looking for a holiday residence or stay at age home, then offered it more here than most places along the Costa Blanca - so welcome to Torrevieja.

More in this category: « Guardamar del Segura Santa Pola »
back to top