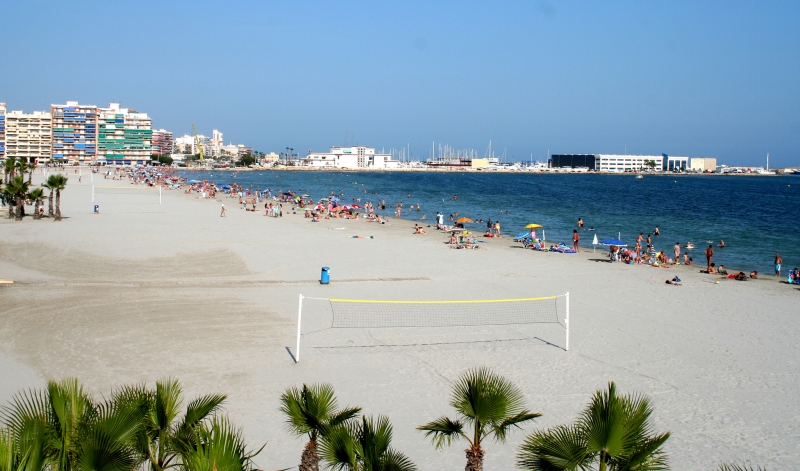 The sea has marked the history of Santa Pola, a tourist and fishing village known for its numerous and long beaches, boardwalks, landscape and middelhavsmat.En modern yacht club and a sheltered bay invite visitors to practice windsurfing, sailing, swimming, diving and other water activities Best of all is that the town still retains its character, fishing port and fish factory which is one of Spain's largest along the Mediterranean.

More than 300 sunny days a year, an average annual temperature of 18ºC and a privileged location at only 10 km to Alicante Internationale airport is also one of many good reasons to visit or stay in Santa Pola.

Santa Pola is known for its beautiful sunsets, scenery, friendly people and the opportunity to buy fresh fish daily from the fish stalls at the marina, which is open every evening, fresh fruit and vegetables from two markets that are open Saturday and Monday of the year, and for their fasaliteter and loyalty to residents and tourists. The city with sina lying idyllic plazas and squares have a good deal to most fasaliter as restaurants, a beer garden, shops, banks, pharmacies, shops etc not to mention the old town with its narrow streets where you can find everything from shops to bars and restaurants where you least expect it. We just have to explore the city and enjoy life. Santa pola has a newly built bus station where there are buses with multiple daily departures to (Alicante city, airport, train station), Elche, Torrevieja, Cartagena and departures to Madrid and bus connections to most of Spain.

Santa Pola has 15 km. coastline, of which 11 km beaches of fine sand toward facing south, here you can also enjoy the natural diverse elements Cape Sierra, the fishing harbor and the natural park of Salinas where you can stroll along the beaches and the salt lakes of La Marina and where the whole year is more than 150 bird species, including flamenco pink.

Over 70% of the territory is protected, which makes Santa Pola to a municipality with a beautiful natural landscape.

3 km away is the famous island of Tabarca that it runs several daily avganer with taxi boats and catamarans with glass hull where you can contemplate the sea bed and the amazing colorful fish life from. Tabarca is one idyllic spot for diving with its spectacular and crystal clear turquoise water.

Santa pola offers promenades with the smell of the sea while walking, jogging or cycling along the coast and the Mediterranean. Mountain plateau Cape sierra with its many walking and cycling paths extending from Santa Pola to urbanization Gran alacant consisting apartments and villas with resident spanijoler and Europeans, but mostly from central Europe and Scandinavia who owns holiday apartments and villas in this area. Straight depressed plateau where Grand alacant is also the famous urbanization of the Mediterranean Sea Los Arenales located in Elche municipality with its bustling life during the summer season and the wonderful sandy beaches. This urbanization is an old Spanish seaside resort which has been widely developed in recent years with the apartment complex in the first line of the beach with a stunning sjøutsik.

More in this category: « Torrevieja Villamartin »
back to top